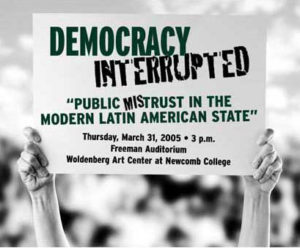 3:00 p.m. – Freeman Auditorium in the Woldenberg Art Center, followed by a reception in Woodward Way.

Democracy Interrupted”Democracy Interrupted: Public (Mis)Trust in the Modern Latin American State”
The 1990s were years of intense economic and political reform in Latin America. Neoliberal economic restructuring, coupled with a growing process of democratization, resulted in an interesting realignment of state-society relations in the region. The process of market liberalization, with its painful economic and social side effects, strained society’s credibility in the state’s ability to satisfy its basic needs.

Yet, the concurrent process of democratic consolidation also emboldened Latin American citizens both to express their discontent with their governments and to challenge their legitimacy more forcefully and vocally in the public space. The result has been a growing sense among Latin American citizens that the leaders managing the political and economic liberalization of their countries, ostensibly in their interest, have betrayed their trust. This sense of betrayal of the public trust has led Latin American citizens to by-pass traditional channels by using newly-appropriated democratic powers, mobilizing to demand accountability from the state for its perceived failures. The most extreme of these social movements have interrupted not merely the process of economic liberalization but also the course of constitutional presidencies. Disenchanted electorates, having lost faith in their representatives, have mobilized to revoke their mandates. But, is the effective governance the region requires possible under these conditions? What are the implications to be drawn for the region’s process of economic and political reform?

The Presidential Symposium Steering Committee of the Stone Centerhas gathered analysts and observers of Latin America from a variety of backgrounds to address the relationship between the decline in public trust of the state with the dual processes of political liberalization (democratization) and neoliberal economic reform.

Arturo Valenzuela, director of the Center for Latin American Studies at Georgetown University and special assistant to the President and senior director for Western Hemisphere Affairs at the National Security Council in the second Clinton Administration. During Clinton’s first term he was deputy assistant secretary for Inter-American Affairs in the Department of State.

Eugenio Raúl Zaffaroni, director of the department of Penal Law and Criminology at the National University of Buenos Aires and Minister of the Supreme Court of Argentina.